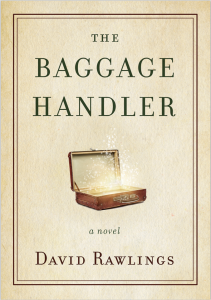 Fresh off a run-in with his wife, harried businessman DAVID disembarks the plane angry and impatient. No company car awaits him, a foreboding sign of the coming standoff that will either save his job or kill his career.

GILLIAN thought she would be more excited about coming to her niece’s wedding, but she will be spending a few days staying with her oversharing, overachieving sister. She is just hoping to survive.

MICHAEL has come to the city for a track scholarship he doesn’t want … but his father demands. But it’s the only way he can reach for his artistic dream, and failure means working in hardware. A “real” job.

When the three travellers arrive at their destinations they quickly realize they have picked up the wrong suitcase at the airport.

They make their way to the baggage depot – a mysterious building in a deserted, industrial part of the city. There they meet The Baggage Handler, who shows them there is more in their baggage than what they have packed.

And they have to deal with it before they can leave.

Gillian settled back into the sofa, the leather creaking under her. Her upward glance caught her reflection in the mirror. She scooched down in a hurry, out of her own eyeline, and looked instead at the TV on the wall. She lifted a remote and punched up the volume on the soap opera.  “But, Ranch, I can’t love you when I’m in love with your twin brother.” The brunette with the heaving bosom walked past her costar toward the camera and stared off into the middle distance over Gillian’s shoulder.

Ranch moved in behind the brunette and placed his hands on her bare shoulders. An emotive piano tinkled away. “Kourtnay, my love, my soul mate. I’m not Ranch, nor am I his twin brother, French.” A string concerto joined the piano as the music swelled and drew Gillian into the soap opera’s manufactured pain. “I am their long-lost triplet, Caesar.” The music climbed to a crescendo; a final, moody piano chord hung out to dry as the screen faded to black.

Gillian jumped as her senses were assaulted by pulsing graphics and thumping dance music. “In this week’s edition of Perfect Woman magazine, has Taylor Swift finally had a bad hair day? We have the photos!” The voiceover grated on Gillian’s nerves as an unflattering portrait of a royal getting off a plane in a windstorm was smeared across the screen.

Gillian’s hand patted down her own hair out of reflex.

“Ten ways for you to look fantastic 24/7!” A woman rolled over in bed to reveal a perfect, lipsticked smile and a cheesy thumbs-up. “Our celebrity makeover judges give you the tips to look fabulous at any time of the day or night!”

Gillian shook her head. No one with kids looked like that. Did they?

“And we’ll fulfill every woman’s dream by revealing the makeup secrets that will catch the eye of every man in town!”

As she sipped her juice, Gillian racked her brain for one woman she knew for whom that was a dream. She came up empty.

“All in this week’s edition of Perfect Woman magazine! Out now!”

On the screen, popcorn spilled across a carefully groomed rug.

Three boys bounced on the sofa in a family room wearing crisp jeans, white T-shirts, and impossibly perfect tousled mops of blond hair. Their mother swept in, her hair perfect, her makeup immaculate. “Boys!” An ever-so-slightly disapproving look drifted across her face as she pulled a steaming muffin tray from behind her back. “Who’s the best mom on the street?”

“You are!” the boys shrieked as they raced over to her, grabbed a muffin the size of a small Volkswagen, gave her an energetic hug, and sped off to the kitchen table.

The mother sighed in triumph—another job well done—as a deep male voice floated across the scene of domestic bliss. “White Wings muffins. Do you want to be the best mom on the street?”

Mom turned to the camera and smiled widely. The voiceover continued. “Well, do you Gillian?” Mom winked.  Gillian dropped the grape juice on the carpet. She stared at the television.