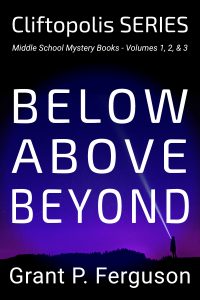 I hear a distinct click! Luke goes all ninja, crouching as if he’s about to attack. Zack looks like he’s going to murderlize someone. I’m still clueless but freeze at the second click! My eyes struggle to penetrate the thick foliage. Scanning until things come into focus, I stop the slow pivot at the sight of a cocked double-barreled shotgun pointing at my face. Breath heaves out of me with a shudder.

“Reach for the sky!” A scraggly farmer in bib overalls steps from behind a tree.

Did this farmer guy use one of Woody’s lines from Toy Story?

Wyatt starts doing his jumping up and down thing while straining his arms toward the heavens. I glance over at Maribella, who peeks from behind Luke.

I notice movement next to the tree on the opposite side of the path. Click! Click! A tall blonde waves a shotgun as she slides from behind the tree and stands next to the farmer.

If this guy with the shotgun weren’t so gangly and bent, he’d probably top six feet two, at least a couple of inches taller than either Luke or Zack. Dirt seems to swirl around his work clothes like a swarm of flies and mud clings to his boots like a pair of wet wool socks. I bet if the string-bean farmer didn’t have that shotgun, Zack could easily take him out—quick.

In comparison to the farmer, the girl appears less dangerous. Now that she’s in the sunlight, I see she’s wearing clean but frayed jeans and a loose-fitting work blouse. But height-wise, she’s intimidating. Slightly shorter than Zack, she looms over Trish and Maribella. Each time the blonde Amazon waves her shotgun toward Wyatt, he goes bananas.

The farmer nods at the Amazon. She glances around and nods back. He spits, then grumbles, “Get on, now.” Using his weapon like a pointer, he motions for us to head toward the trees.

In less than a minute, my dream of a short walk into Cliftopolis has turned into a nightmare.

Although Brad Andersen might seem like your typical twelve-year-old eighth-grader at Bryne Middle School, he’s not. His parents died shortly after his birth, and he hates living in foster care. No matter how hard he tries to obey his foster parents and please his teachers, Brad somehow ends up in trouble—a lot. And now, he’s obsessed with uncovering the truth, including whether huldra are real.

While seeking the truth about his family history, Brad discovers his birth parents were murdered, thrusting him into a dangerous investigation that reveals long-kept secrets about the original settlers of Harmony Valley.

Somehow, Brad and his two friends must bring the murderer to justice while preserving the Harmony Valley secret. But they’ll need to act quickly before the killer fulfills a plan to destroy an entire race of benevolent but misunderstood creatures.

18. How can anyone get in touch with you?

4 thoughts on “Meet Grant Ferguson, Author of the Cliftopolis Series”