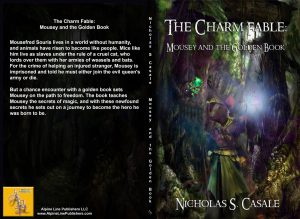 “Sopher’s form had the shape of a mouse in a long, white dress. The folds and ribbons of her gown were rolling sheets of paper, covered in the most elegant calligraphy. Her tail was a long, red ribbon; just like the book’s attached book-mark. Her face and paws were made of golden light, and her eyes were like splatters of blue ink.”