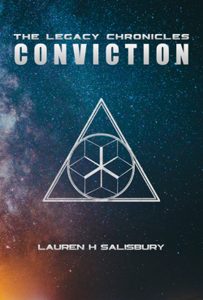 “Groaning with the tumultuous emotions overwhelming his good sense, he couldn’t help what he did next. He brought his hand up to cradle her cheek, enjoying the feel of her soft skin. She leaned into his touch and closed her eyes for a moment as if drawing strength from their connection. His heart rate picked up speed. Moving slowly forwards to give her plenty of time to back away if she wanted to, Than let his gaze linger on her lips. They parted on her next exhale, and he was lost. Closing the remaining gap between them, he bent his head to hers … and heard the crunching of feet on gravel behind one of the shacks to their right.”

Short as it is, this is one of the moments of Conviction I will always remember with perfect clarity—not because it’s the first time they nearly kiss, but because they don’t.

In my plans, I had them kissing in this scene, but when I came to write it, no matter how often I replayed it in my head or tried to write it a different way, something kept interrupting them and they refused to kiss. It’s the first time I ever experienced characters refusing to follow my script, and it gave me a new appreciation for writers who had previously complained of this phenomenon. It also fits the couple much better than my original narrative, so it brings a smile every time I read it.

Lauren has developed a give-away to celebrate the release of Conviction.  Go to https://www.rafflecopter.com/rafl/display/ebe7708e1/

You can get Conviction at http://a.co/doeQtkg